Faces of The Vista 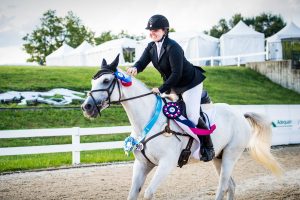 Brooke Burgess is a USC Aiken graduate in Business Management. Since February 2018, she has held the position of Events Coordinator for The Vista Schooling and Event Center in Aiken, SC. Her duties include managing the office and coordinating The Vista Shows and Events. Brooke also manages her own boarding facility at her personal farm (Beating Hart Equestrian) that she purchased the in Fall of 2020. Prior to joining the team at The Vista, Brooke worked at barns in Aiken and the Charlotte, NC area.

Brooke was the 2018-2019 President of the USC Aiken Eventing team. The team placed third out of twenty three teams in the 2018 Intercollegiate Championship, where Brooke individually placed second out of twenty two riders in her division. Brooke recently went to the 2019 American Eventing Championships where she placed 11th in her division. She has a very special relationship with her horse, Pelear Por Oro, a twelve-year-old Arabian rescue she has had for eight years.

Brooke grew up in Fort Mill, SC. She recently got married to Preston Burgess.

Janet moved to Aiken from western New York where she owned and operated her own business. She brings her business perspective and love of horses to The Vista. When Janet actively rode, she participated in showing her horses in the western arena. In later years she enjoyed relaxing on the trail. Janet likes to keep herself busy working at The Vista, boarding a few retired horses and pet sitting.

Jamie has been part of The Vista team since the beginning. After earning a Pre-Med degree from Springfield College, he became a full-time course builder with contributions to Fair Hill, Southern Pines, Great Meadow, 2018 World Equestrian Games, among others. When not traveling building horse jumps, Jamie is the Technical Coordinator at The Green Mountain Horse Association and in the process of building a house there in South Woodstock, VT.